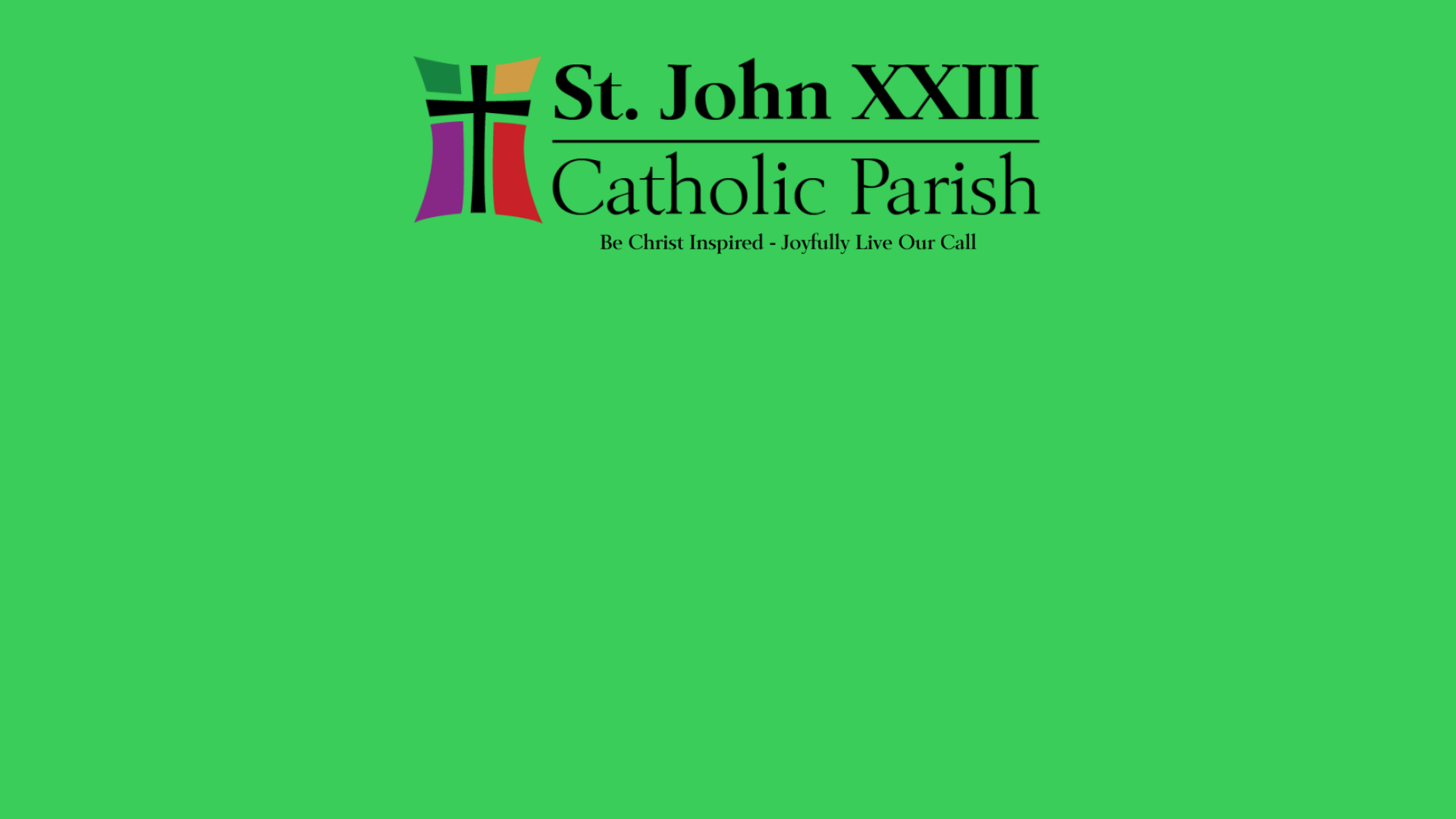 The History of Immaculate Conception

In the year 1847, Catholic settlers arrived in the area now known as Saukville, Wisconsin. Father Francis Pendergast, a spiritual leader who provided for their education and sacramental needs, visited on an occasional basis, ministering to this small group of fiercely loyal Catholics. He celebrated Mass in the home of one of the settlers. Later, Father Bradley provided the priestly ministry for the residents of Saukville.

On February 24, 1856, the Catholic community gathered with Father Seif to prepare a resolution to form a congregation. The resolution contained a request to Bishop John Martin Henni for consent to construct a church. Once the community received his consent, Alois Stopper donated a half acre of land for the building.

In 1858, the emerging parish erected a small stone building. Bishop Henni was present for the laying of the cornerstone, along with Fathers Francis X. Sailer and Dougherty, as well as the original parish trustees Alois Topper, John Seng, and Paul Suennen. Of significance, in the fact that this same year, the Virgin Mary appeared to St. Bernadette Soubirous at Lourdes, identifying herself as the Immaculate Conception.

In 1865, the congregation completed the first small church where they could celebrate the liturgy. They named this church St. Mary’s Parish. Its first resident pastor was Reverend Anthony Rasch. Parish baptismal records identify Father George Strickner as minister of baptisms from 1866 through April 1868. Father Joseph Voissem succeeded him, building the parish’s Catholic school.

In 1872, Father Joseph Albers became pastor. During his term, the parish built a larger and more impressive church. They built the new church above the old, leaving a large portion of the old foundation in the present church’s basement. The new church was dedicated in 1875, which was chiseled in stone above the main entrance, along with the Latin words for “of the Immaculate Conception of the Blessed Virgin”. Father Albers was succeeded by Reverend John Friedl in October 1880, who was pastor until September 1887.

In October 1887, reverend Theodore B. Meyer became pastor. Under his guidance, they greatly improved the interior of the church and built and addition onto the school. The next pastor appointed was Reverend Peter Holfeltz,   from November 1896 to September 1898. Other succeeding pastors included Reverend H.J. Dreis, October 1898 to June 1910; Reverend F.M. Berg, July 1910 to January 1919; and Reverend Francis C. Pichery, January 1919 to October 1922. Reverend F.X. Schneider assumed the pastorate from November 1922 to June 1933, followed by Reverend John M. Voelken, July 1933 to September 1933; Reverend Francis Knoernschild, September 1933 to January 1945; Reverend Joseph Stagl as temporary pastor from January 1945 to June 1948; and Reverend William S. Gensler in June 1945.

Under Reverend Gensler, the parish made improvement’s upgrading the church and school heating systems. His successor was Reverend Cyril A. Rolz, in February 1949. I was during this time that the parish made additional improvements to the church, school and rectory. A major gift initiated the building of a shrine in honor of Our Lady of Fatima, adjacent to the parish rectory, gifts of time, labor and materials from dedicated parishioners were needed to complete the project. Parishioners and other friends of the parish contributed stones, and ground from their properties. Father Volz dedicated the completed shrine on September 23, 1951. The shrine continues to inspire prayer from both parishioners and visitors. It is a fitting tribute to the one conceived without sin, and remains a testament to our strong devotion to the patroness of our parish.

Reverend William J. Weishaupl succeeded Father Volz in February 1956. That summer, a new convent was built to house up to six religious sisters. Later, when the number of sisters living there diminished, the original rectory was sold, and part of the convent became the parish office.

Before Father Weishaupl died on August 3, 1958, he directed improvements to the school hall and kitchen in anticipation of the parish’s Centennial Year celebration. Shortly after his death, the archbishop of Milwaukee appointed Reverend Andrew E. Redig as the new pastor. With enthusiasm and rare competence, Father Redig coordinated final plans for the Centennial Jubilee Celebration, completed them in time for the festive celebration on November 23, 1958. Father Redig was a spiritual man who scheduled parish missions, encouraged retreats and cursillos, and influenced vocations; several young men were inspired to enter the seminary. Under Father Redig’s guidance, the Saint Vincent de Paul Society was established. His inspiration continues to shape the spirituality of many parishioners to this day.

Father Redig’s faith in the parishes’ future and his vision of continuing growth motived the renovation of the church’s interior in 1959. It also convinced him that the parish needed a large addition to the existing school. Work on that addition began in 1961, and it was completed in 1962. The improvements included four modern classrooms, and office and large cafeteria, and state-of-the-art gymnasium.

In order to raise funds to pay for this gym the parish instituted an annual sports Night. For the first Sports Night, held on February 1, 1962, the advance ticket sales exceeded 1500. Many other community events were also held there, and the gym floor was specifically designed for roller skating and basketball.

Immaculate Conception was the pioneer in the establishment of parish councils for the Archdiocese of Milwaukee. In 1966, a Steering committee formed to prepare bylaws and an organizational chart, later adding subcommittees. After that, the Archdiocese mandated this concept for all parishes.

To accommodate the vision and reforms of the Decree on the Liturgy issued by Vatican Council II, alterations were made to the sanctuary in 1965. Father Redig had the further challenge of leading parishioners from the accustomed spectator role in the Tridentine Latin Mass, to initiating them in the participatory role demanded by the Missal of Pope Paul VI.

When Father Redig was assigned to another parish in 1968, reverend Paul Weishar replaced him at Immaculate Conception; it was at this time that, like many Catholic schools, Immaculate Conception experienced the loss of the teaching sisters. With the prospect of increased salaries for lay teachers and the substantial debt remaining from the school addition, the church leaders made the decision to discontinue operation of the school, beginning in 1969. At its closing, sister Madeleva Metten OSF became the last of a long line of religious teachers and principals who had staffed Immaculate Conception School since 1868.

In accordance with the post-Vatican II conception of a more inviting and more prayerful environment for the celebration of the Sacrament of Reconciliation, the dark, impersonal confessional was replaced by a brighter room, the church also made space for a crying room, Father Weishar accepted another assignment in November 1977, and a temporary pastor, Reverend Joseph Coerber, was assigned to serve as administrator.

Reverend Walter J. Vogel arrived as the new pastor November 30 1977. During his pastorate, attention focused on modernizing and repairing the parish facilities, including the challenge of increasing the energy efficiency of the church. Therefore, he directed that a chapel be installed in the lower level of the parish house for the celebration of daily Mass. Later in May 1980, the church interior was renovated, changing the decorative scheme. New carpeting was installed and the pews were refinished. The project was not completed until November 1980; however a rededication ceremony was held the weekend of August 23-24, 1980.

The parishioners developed a realization that with the Sacrament of Baptism comes and rights and privileges, as well as a responsibility to know their faith and serve all of God’s peop0le. Parish ministries, especially liturgical ministries and Christian formation, were expanded.

Following a feasibility study, the parish council agreed to reopen the school, anticipating that Saukville was a growing community, and that the income from tuition and fundraising would allow the school to avoid being a financial burden to the parish. The school reopened in 1985 for kindergarten and the first two grades, adding grades each year as the school grew. The new principal was sister Lucille Coughlin SSND. That same year, Sisters Patricia Wenninger OSF arrived to serve as Director of Religious Education and part-time Pastoral Minister.

Father Vogel remained as pastor until July 1988, when he was reassigned to St. Riag’s Parish, West Allis, His successor was Reverend James F. Hoefer. Father Hoefer had a keen interest in developing and ecumenical spirit in Saukville. In cooperation with the pastors at Living Hope Lutheran Church and St. Peter’s United Church of Christ, ecumenical services were held on both Thanksgiving Day and Good Friday.

In an effort to offset some of the increased costs incurred in maintaining the school, and to enhance the social life of the parish, Father Hoefter initiated a three-day summer festival. It was greatly successful, justifying the time and efforts invested.

Father Hoefter updated the records of the parish, installing a computer system. At the end of his six-year term, Father Hoefer chose not to seek a second term at Immaculate Conception.

Reverend Vince Holubwitz was assigned as temporary pastor until the appointment of Reverend Karl H. Acker in June 1994.

Shortly after Father Acker arrived, senior members of the parish were invited to a picnic on the parish grounds. From that beginning, a senior group formed, with a selection of officers who continue to plan religious and social events.

In August 1990, a new principal, Mrs. Mary Selke, was selected for the parish school, Together with the school committee, it was determined that the school would be for kindergarten through grade six, not eight as originally intended.

In 1995, a significant changed occurred when after 51 years; Victor Roden stepped down as chairperson of the parish’s Catholic Stewardship Appeal. He had not only set a record for longevity in that service, but he also earned the gratitude of the parish and four archbishops!

Despite the tireless efforts of the principals, school parents, and many parishioners, enrollment in the school never reached its goal. After much research and debate, the parish council, together with the school committee, concluded that we would be better stewards by sending our children to the neighboring Catholic schools, and instituting a parish subsidy. Following the 1998-1999 school year Immaculate Conception School closed its doors.

The church facilities continued to require maintenance, including church tuck-pointing, painting of the steeple, replacement of the roof on the new part of the school, and heating systems for both the church and school. A much needed restroom was finally added in the space that had served as the crying room.

In 2002, with the encouragement of Fr. Acker, the church interior underwent a major renovation, reconfiguring the sanctuary area bringing the altar closer to the congregation; The changes included space for the music ministers in front of the St. Joseph altar; relocation of the baptismal font near the side entrance to make it more prominent; installation of a hardwood floor in the sanctuary; brighter lighting; a new sound system with assistive devices to enable hearing; and new carpeting from the nave to the balcony. A narthex area was created to encourage hospitality and fellowship. The interior was repainted to complement the new architectural style. Pew and kneelers were refinished, and installed at an angle. The altar, ambo, baptismal font, and presider’s chair were constructed in a harmonious style. An original oil on canvas of the Crucified Savior with his Blessed Mother at the foot of the cross replaced the Marian painting.

Bishop Sklba presided at the Liturgy of rededication on December 22, 2002.